LogRhythm Named a Leader in the 2018 Gartner SIEM Magic Quadrant 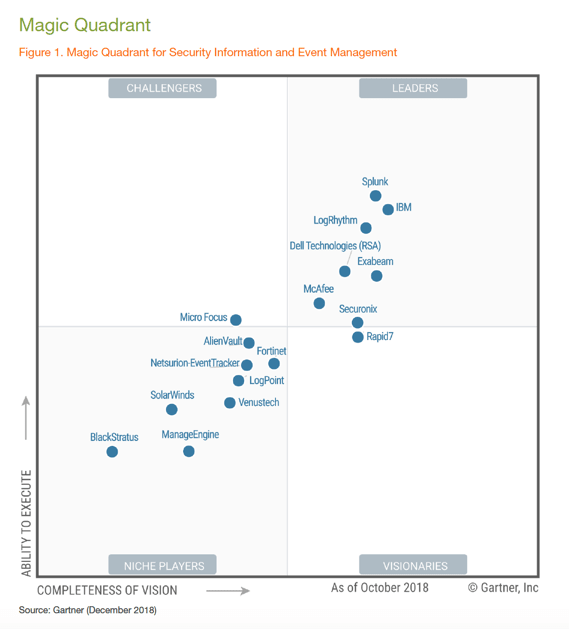 We are pleased to see Gartner’s recognition of LogRhythm as a Leader in its recent release of Gartner’s Magic Quadrant for Security Information and Event Management (SIEM) research report.

A Security Partner to Keep up with Today’s Threats

The security space is not always kind to vendors. One year, an organization may find itself to be the “darling” of the space; the next year, it is deemed a forgotten technology. And there is a very rational explanation — the continued and accelerated innovation from bad actors places security teams in a precarious position: Either align to technology vendors that also continue to innovate, or face greater risk as your security visibility and ability to mitigate threats diminish.

As a result, a single vendor consistently leading the pack is rare in the security space. As bad actors focus on new types of exploits and attack types, security teams are forced to pursue new technologies — and often new vendors — to address these new use cases. Vendors, in turn, must innovate faster than the bad actors to successfully aid their customers in their goal of defending their organizations.

Customers and prospects often express that they “are looking for a partner, not a vendor.” Security teams are seeking both immediate solutions to their security challenges and reassurance. With continued innovation, security teams can mature their programs and are in a position to combat whatever new threats are on the horizon.

At LogRhythm, we are driven by a high rate of innovation and creativity to serve our customers’ ability to mature their security programs and defend against not just the threats that their organizations are facing today, but also whatever new threats may come tomorrow. Our track record as a recognized leader over a sustained period of time is a testament to our continued rapid rate of innovation — even in a space that is constantly undergoing change.