Live incident response and forensic data acquisition is often a very manual and time consuming process that leaves significant room for error and can even result in the destruction of evidence. There are many people involved when investigating an incident, which makes process consistency difficult. Often when retrieving a system, evidence can be tampered with and altered in the short time frame between the identification of an issue and the interception of the suspected host or user. For this reason, electronic evidence can sometimes be thrown out of a court of law due to possible tampering or inability to show proof in a court of law.

PSRecon gathers data from a remote Windows host using built-in PowerShell (v2 or later), organizes the data into folders, hashes all extracted data, and sends the data off to the security team in the form of an HTML report. This can then either be pushed to a share, sent over email, or retained locally.

The ability to lock down and endpoint can be useful when investigating a system infected with malware, especially when there is risk that the malware will spread to a share or other critical systems within the enterprise. Sometimes the quickest and most effective way to stop the spread of malware is to simply knock the host offline until IT/Security can respond.

Alternatively to quarantining the host, PSRecon allows you to disable an active directory account following the acquisition of live forensic data. All of these various options can be combined to turn an often manual process into a streamlined and easy method to remotely obtain forensic data from a target host and quarantine the system from the network. Within the report, you have an accurate view of a significant portion of the target host, in its entirety. One of my favorite aspects of the report, is that everything is self-contained, making it easy to share as there is no reliance on a centralize server. Even the images are encoded directly into the report’s HTML. 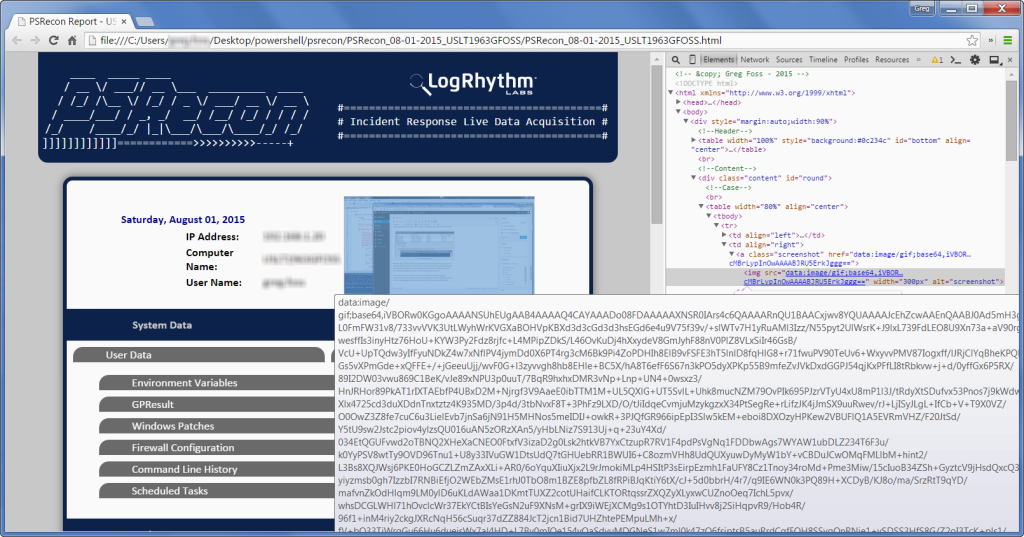 What’s more is that if you have a team of Incident Response professionals, you can push the report out to all of them at the same time. With more eyes on the evidence, the easier and faster it is to spot the threat, especially when combined with the data already gathered by the SIEM. Not only are we mitigating the threat and kicking off an investigation within minutes, we have also already obtained somewhat ‘forensically-sound’ data from the remote host that will help responders better understand the full picture.

While on the topic of SIEM, this script integrates easily into LogRhythm to allow for the execution of this script as a SmartResponse™. This will work with various AI Engine™ alarms or can be run ad-hoc against local/remote hosts. In particular, any case where Malware is observed would be key to pull forensic data and then quarantine the host. The SmartResponse™ also uses its own included version of PowerShell, as the remote host is normally in an compromised state, so the PowerShell executable itself should not be trusted. One of the limitations of the open source version of the tool. 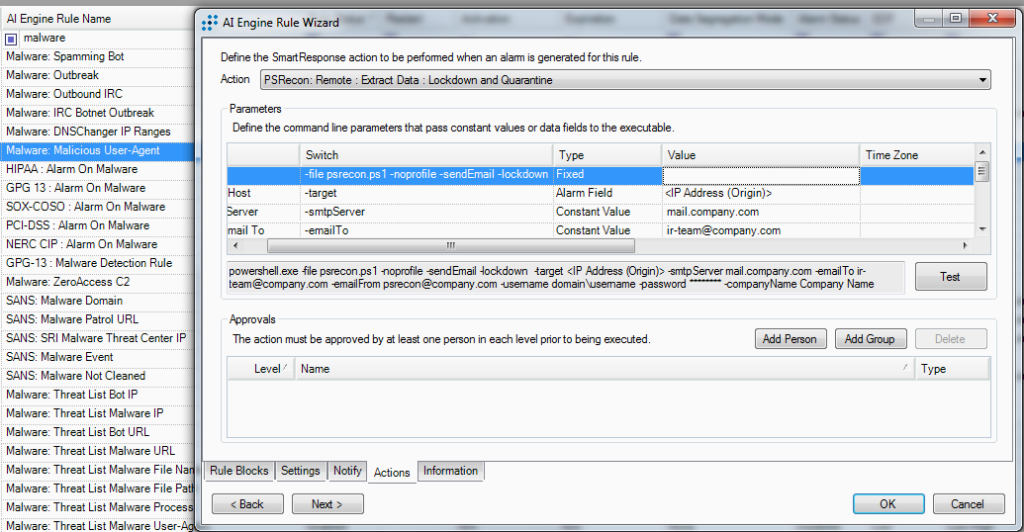 The current available SmartResponse™ actions are:

This works well with LogRhythm’s Case Management workflow as well. This is helpful in not only creating a timeline of events but gathering forensic data and performing automated defensive actions. Speaking of timeline, PSRecon writes its own logs as well, to track its actions and verify activities on the host. This is beneficial in that it will help you show what activities the script performed on the suspected host.

While on the topic of logging, PSRecon also logs attempted attacks against itself… So, take an example scenario where someone tries to hijack another employee’s browser by way of a SmartResponse™. To do this they would inject an XSS attack within a user-controllable field that is reflected on the HTML report. These attacks are detected and logged, allowing for additional actions to be taken. Of course, there are tons of ways around this, it’s just a small added precaution for when the script is integrated with security infrastructure.

PSRecon takes a long, cumbersome, and inaccurate process that used to take days to complete and turns it into a quick, effective, and powerful means to instantly acquire forensic data and respond to various threats directly from the LogRhythm SIEM; streamlining a significant portion of the incident response process.

The project is still very much in beta and I’m looking for feedback from the security community to help with ideas and code improvements going forward. So, check out the GitHub repository and let me know how we can make this better!