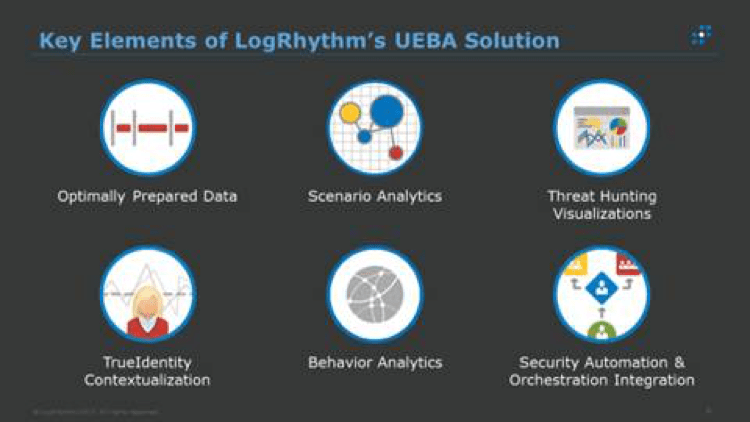 The threat landscape grows increasingly unpredictable and dangerous as threat actors expand in number and their attacks increase in sophistication. From motivated insiders to well-armed nation-states, threats to your organization are increasing in number and difficulty of detection.

A comprehensive UEBA solution includes a number of key components that work together to help you effectively surface potential user-based threats.

When it comes to analytics, the adage of garbage in, garbage out holds true. Your analytics are only as good as your data.

The full UEBA solution utilizes LogRhythm Machine Data Intelligence (MDI) Fabric. LogRhythm’s MDI Fabric processes and enriches data from across your environment to optimally prepare it for accurate analysis through various tools, such as CloudAI. Leveraging classification, contextualization, and time normalization, the LogRhythm MDI Fabric uniquely enables effective machine analytics. The MDI Fabric works out of the box, ensuring rapid time to value. This means your team can focus solely on security rather than developing and maintaining rulesets.

Scenario and behavior analytics provide the depth of analytics you need to deliver comprehensive visibility across the full spectrum of attacks facing your organization. LogRhythm’s UEBA solution detects advanced threats via scenario analytics, as well as behavior analytics using ML and AI through CloudAI. Scenario Analytics provides customers with a set library of field-proven, user-based threat scenarios that operate in coordination with ML-observed activities. This is done in an effort to corroborate security relevancy for greater precision in identifying threats.

Finally, LogRhythm’s UEBA solution features SmartResponse™. This SOAR security solution is a powerful and flexible automation framework that streamlines incident response by reducing the time needed to perform common investigation and mitigation steps. It also allows semi-automated, approval-based operations so users can review a situation before countermeasures are executed.

Shackleford starts by running through CloudAI’s capability to sift through the noise and pull out actionable intelligence from large data sets. His review validated the platform’s ability to record and analyze user behavior to create a risk score.

When it comes to difficulty of operations and the ability to glean insights, Shackleford commented that he was “impressed, as always… with the ease of use.” He wraps up his review on CloudAI for UEBA, stating “Adding in UEBA on top of the existing analytics and processing capabilities has made this really a much more powerful platform to do deep analysis and reporting around anomalies.”

Watch the full webcast now to learn more about LogRhythm CloudAI for UEBA and how it can help you detect dangerous user behavior and rapidly mitigate threats.