LogRhythm’s SmartResponse™ is a powerful and flexible technology that has been further extended in LogRhythm 7 to allow actions to be executed on System Monitor Agents. These actions can be launched when an individual alarm is generated, on demand, or at a scheduled time.

In this post, I want to focus on using the new SmartResponse on-demand feature—specifically using it to run any script or command at an Agent.

Typically, LogRhythm SmartResponse plug-ins are developed to achieve a specific action. For example, log off a user or add an IP address to a firewall rule.

However, it turns out that the SmartResponse framework is flexible enough to provide the option to run more or less any script or command of your choosing using the existing communications channel between the LogRhythm Platform and System Monitor Agents.

Typically, a SmartResponse will launch a PowerShell script using the command line parameter “-file.” So for example powershell.exe – File Logoff.ps1

However, PowerShell is a very flexible scripting engine, and amongst other things, it will let you run BASSE64 encoded commands directly—without needing them to exist in a file on a disk. You can do this with the -EncodedCommand switch.

The reason for using BASE64 encoding is because passing a command string to PowerShell can become difficult with single and double quotation marks and other special characters, and using BASE64 removes this hurdle.

The “EncodedCommand” parameter is just used as a vehicle to transport the actual script itself. So you can now go ahead and create a new plug-in in LogRhythm using just this xml file. It’s called “SR No Script” and you can see this has been imported as the last plug-in in the list below.

Creating BASE64-encoded strings is actually pretty straightforward in PowerShell and it can be done with just two lines of PowerShell.

To make doing this faster when actually using the SmartResponse, I made a standalone script that takes either a ps1 file or a command line as input and converts it into BASE64 encoding and then places it onto the clipboard for you.

Here are a couple examples of running my script first with a file as input and then with a command line.

In the LogRhythm console, select the Agent where you want to run a script, right-click and then choose Initiate SmartResponse. Choose the “SR No Script: SR Base64 Command” action, and right-click paste the BASE64-encoded command: Click OK and the action is sent to the System Monitor Agent:

The LogRhythm System Monitor generates Event 4031 when the SmartResponse is delivered: 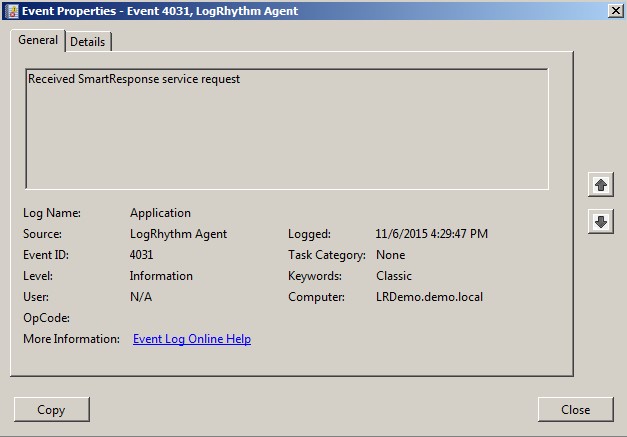 This was the Event logged for the command line I encoded earlier ‘dir “C:\Program Files”’. In this window, you can see both the encoded command and the output. This SmartResponse offers both ops and security teams the possibility to run any command they require on hosts that have an agent installed. This can be extremely valuable in a highly distributed or segmented environment where PowerShell remoting is not allowed or the network is segmented and there is no other access to the endpoint.

Often in an incident scenario, you just want to be able to quickly run a command and get the results, and this provides the tools to do just that.