Insider threats pose significant risks to your organization. Their actions are difficult to detect and many incidents take months or longer to discover. The key to defending against this class of threats is to understand the who, the why, and the when. Let’s look at those critical elements and what you can do to protect yourself.

The Who: Potential Threat Actors Within Your Organization

Insider threats can be anyone who has access to a business system, including internal permanent staff, contractors, temporary staff, partners, and former staff. This means that everyone, including managers and executives, should be equally scrutinized.

Complicating matters​, these individuals can intentionally or unknowingly assist threat actors in conducting activities against your organization. The Australian Government highlights two categories of employees who pose a threat in its insider threat security handbook.

The vast number of suspects, as well as the fact that attacks can be intentionally or unintentionally committed, are among the reasons why insider threats are so difficult to detect. The good news is that you can add layers of intelligence to help you narrow your area of focus.

The Why: Motivations for an Insider Threat Actor

Each attacker will have his or her own motivations for deviance. Ultimately, there are many driving forces behind attacks.

Financial gain has proven to be a leading factor behind many insider breaches. The financial gain can be small (such as a janitor selling a laptop on eBay to make a quick buck) or large (such as a lower-level staff selling personally identifiable information (PII) on the dark web).

Typically, sensitive intellectual property (IP) is the target for those motivated by business gain. IP can be used to boost product offerings, eliminate a competitive advantage, or assist a bad actor in a business deal. Not only can an insider threat help a competitive organization, but it can also leave the targeted business with significant expenses, lost productivity, and a damaged reputation.

A person can become disgruntled and seek revenge for many reasons. Such reasons include job dissatisfaction, perceived inequity, disagreements with co-workers, or a potential layoff.

Political, religious, and social beliefs can also be strong motivations for insider threats.

The When: An Insider Attack Can Happen at Any Time

A malicious insider will understand the vulnerabilities of an organization, as well as how and when they can be exploited. An insider threat can easily blend in to a normal working environment, until just the right moment, especially if the malicious insider opts for the stealthy low-and-slow approach. Some cases of espionage have flown under the radar for months and even years.

How to Protect Yourself from Insider Threats

Fortunately, many of the activities performed by a malicious insider can be detected and stopped by using a layered security approach. This layered approach should include the usual security defenses, such as network forensics, security information and event management (SIEM), IDS, and endpoint detection. However, it should also include security awareness training, policy enforcement, and auditing. Often companies that are breached by an insider threat have overlooked these security programs.

When facing insider threats, there are some points to consider when you are looking to heighten your security operations.

Beyond these tips, user and entity behavior analytics (UEBA) can go a long way to help you detect and respond to insider threats. Effective UEBA solutions perform profiling and advanced anomaly detection through diverse and complementary analytical methods, including scenario- and behavior-based techniques. By employing multiple methods, you can analytics in depth to protect your organization from malicious, compromised, and accidental user-based threats.

LogRhythm’s UEBA solutions deliver both scenario- and behavior-based analytics as an integrated component of the LogRhythm NextGen SIEM platform or as a standalone product. In this example, I’ll explore how LogRhythm’s scenario-based threat detection capabilities work to detect insider threat activity, as well as track a threat progressing through the Cyber Attack Lifecycle.

How LogRhythm Can Help Detect and Respond to Insider Threats

In this use case, I created a privileged user with the username eanderson and added it as a trusted system administrator. I then logged onto a server with the new account, modified account passwords, and conducted some other nefarious activities. Let’s walk through the use case as a security analyst.

In the alarm viewer, you can see that AI Engine has detected the nefarious activity, initiating a high-priority progression alarm.

A quick look into the alarm details reveal the privileged user in question, eanderson. A further drill down into the alarm displays the affected impacted users whose passwords were modified. Now that you understand which users were impacted, you can use the pivot feature to go backwards in time and see what other activity this user was up to. The pivot revealed further classification and common events, as well as other metadata that can be further investigated. 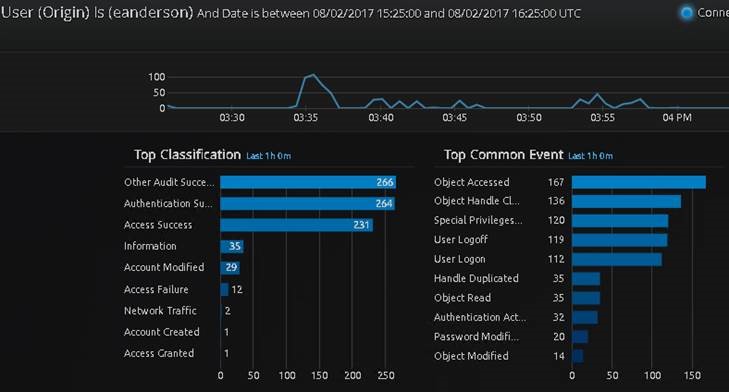 At this point, you should open a case then add all relevant artifacts and notes for investigation. Back at the alarms tab, you are prompted with two additional alerts.

You continue the investigation by selecting the next alarm in the timeline with a 97-risk rating, which indicates that an admin deleted a number of files. To confirm your results and add further information to the case, you can jump into the third and final AI Engine alarm. This progression alarm indicates a progression through the Cyber Attack Lifecycle from target attainment to exfiltration/corruption/disruption. Once you confirm the identity of the malicious user, you can automatically neutralize the insider threat and close the case.

In this use case, you stopped Mr. Robot from wreaking havoc on your environment. This insider threat was quickly detected and neutralized through advanced features, including File Integrity Monitoring, privileged user and group lists, UEBA, and an intuitive centralized UI/UX.

To take your UEBA capabilities to the next level, you can layer behavior-based analytics on top of scenario-based analytics to detect threats across the full spectrum of known (e.g., DDoS and drive-by attacks) and unknown threats (e.g., insider threats and zero-day malware).

If you’re interested in learning more about how LogRhythm can help you stop insider threats and detect stolen accounts using full spectrum analytics, read the in-depth review by SANS Analyst, Dave Shackleford below.