Check out the latest security tips and tricks, news, and insights and join in the conversation. 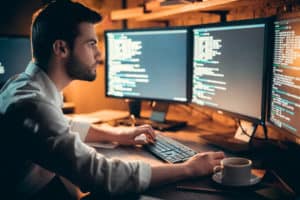 Thanks to Sally Vincent and Dan Kaiser from the LogRhythm Labs team for developing the process and guiding content described in this post. Threat research can be an invaluable asset to security teams when attempting to formulate a proactive stance… The use of Docker containers is rapidly becoming the standard approach for most companies to deploy services in their environment; however, it also introduces risks and vulnerabilities. Explore the pros and cons of containers and how to mitigate Docker container… What The FireEye Breach Means for Security Operations Teams On December 8, 2020, FireEye announced that they had been “attacked by a highly sophisticated threat actor” and that they “found that the attacker targeted and accessed certain Red Team assessment… To stay on top of the latest threats, you need a broader view of malicious activity that could impact your business. While enterprises traditionally focus on desktop hardware, the mobile space is now gaining traction for cybersecurity protection as their… Major Update to the LogRhythm MITRE ATT&CK KB Module When LogRhythm originally developed and launched the MITRE ATT&CK Knowledge Base (KB) Module, we worked under MITRE ATT&CK’s version 6.  MITRE is constantly developing the ATT&CK framework, and many changes have…